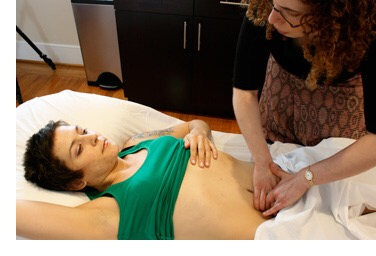 Today, I want to tell you a story of something that happened to a good friend of mine this weekend...but first, some context...

Does this sound familiar?

You roll up to the gym, you grab a roller or ball and start rolling out. After your gym/CrossFit/whatever session, you might be back onto the roller or ball again with some stretches as well.

With the massive increase in "mobility" exercises, drills, and not to mention "things" you can buy to help release muscles, more people than ever are interested in keeping their body in good shape and releasing muscles - This is a good thing.

I have been around the world and there is a disturbing trend - coaches, those who aren't qualified health professionals, are helping people release by stepping on them (presumably to avoid any accusation of "massaging") or just helping them "release" their muscles including Psoas.

This is a DANGEROUS thing!

It is up to you whether you want to do this as a coach - is it covered by your insurance? If you are a client, again, it is up to you - what happens if things go wrong? Ideally, you should get a health professional to help you release your muscles, especially in the abdomen... The other joints - I understand. money is an issue, it seems all the same (it isn't), you can't be bothered, etc. I am truly ok with people trying to take care of themselves.

What I want you to do is just understand the risks...and then I will treat you like an adult that can make their own decisions. 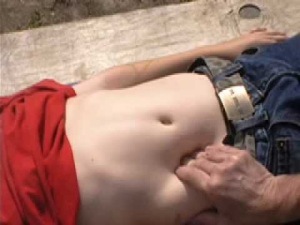 Karin (not her real name) is an old friend of mine. She has had some issues in the past that I have helped with. Karin trains at the local globo gym and has seen other health professionals as well. I personally haven't treated or seen Karin for ages...literally 8 months ago.

Karin told me she saw someone last week twice and during that time there were lots of "adjustments" and her "Psoas" was released fairly aggressively (Karin's description). This therapist has a good reputation and is well trained and it could have easily been me, a physio, a chiro, a massage therapist or osteopath (except I don't go aggressively for Psoas...more on that later). The point is that Karin became unwell after seeing a well qualified therapist...she didn't just ask a friend to help her...she did the right thing and the therapist did as well.

Anyway, Karin felt unwell after the session and got worse, such that she threw up twice within half an hour. She tried to put up with it (she is a tough girl) but couldn't get any sleep that night and every time she moved, she had severe pain. She still had the vomiting and now diarrhea. When she contacted me, I told her to go straight to emergency as I thought she had a ruptured appendix.

When they operated on her, she they took it out and found it had a small rupture in it.

Now, it could be that it was ready to go and a sneeze could have set it off but she had this pain since straight after the treatment and it only got worse. That is part of the risk of working in the abdomen - whether it is Psoas or Iliacus or whatever deep structure you are going for. There is a lot going on in there.

The following is to help outline some of the reasons - anatomical and philosophical - why I don't get stuck in like I used to (and was taught to). This is not about someone rupturing an appendix - I think that it might have contributed to the situation but probably wasn't the only reason.

Why I Don't Aggressively Release the Psoas

1. RARELY is the Psoas the primary problem or the primary contributing factor. I often find that the psoas is reacting to something and I would rather treat that "something" and then on the retest, the psoas is happier and MUCH LESS pain for the patient 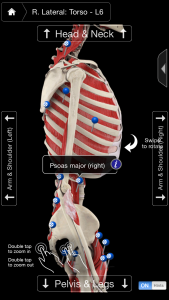 2. You can't effectively get to it in most people without causing lots of pain. When I go looking for it, I start by trying to find the anterior spine (you can feel your spine through your tummy!). A guy my size, forget it! I will hit you before you can get deep enough to feel my spine. Most people have a Psoas that is roughly in line with the front of their spine, maybe a little bit of it anteriorly...but to get any sort of pressure on the muscle, you are going to have to get to at least below the line of the anterior body of the vertebra...not happening in a lot of people...maybe a skinny girl. I have done it before but the pain is significant and causes the patient to tense up so the effect is almost worthless. 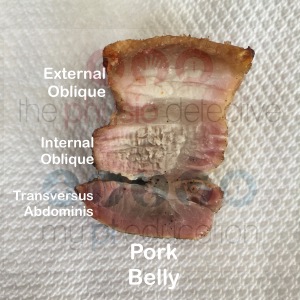 3. I suspect a lot of people need tender spots in their rectus abdominis and obliques worked on. If you are a high level athlete, these muscles can be quite dense - have a look at pork belly. We have a similar abdominal wall. You have to get through all those abdominal muscles and then the internal organs before you get to psoas. Like point 2 above, it is not easy to get to. 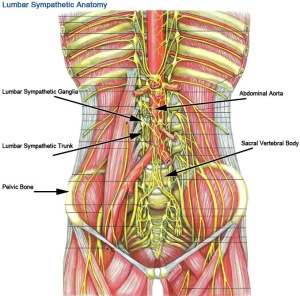 4. The Sympathetic Trunk lies right next to the Psoas. If you manage to get to the Psoas, you might irritate these important nerves. These nerves control your internal organs from your heart, lungs, skin, bowels, sexual reproduction organs, etc. Irritating them can make you feel ill, nauseous or sick. 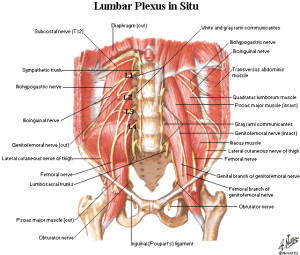 5. The Genitofemoral and Femoral nerves along with the gray rami communicates (small spinal nerves) are also around and through the Psoas muscle...this can cause shooting pains and altered sensations like pins and needles. 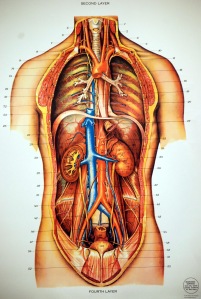 6. The Abdominal Aorta and Inferior Vena Cava are major blood vessels that run along the spine. These are usually resilient but some people have an abdominal aneurysm. If you poke around looking for the psoas, you can kill someone by rupturing it. The Abdominal Aorta then branches into the Common Iliac Arteries. These arteries lie in front of and next to the Psoas muscles...if you feel a pulse, DON'T RELEASE IT! 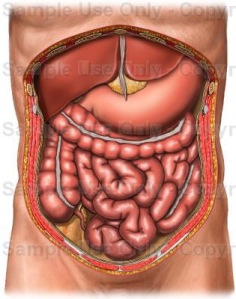 7. The intestines are all over the Psoas. They usually just get out of the way but sometimes they can get pinned down. To experienced hands, intenstines feel like hollow sausages and definitely feel different to the psoas muscle. But it is a subtle distinction. In Karin's case, she probably had a low grade, "grumbling" appendix that got irritated and ruptured from the release. Have a look at the picture. You have to get through the muscles of the abdominal wall and then all of this viscera and then past the blood vessels before you get to the psoas. 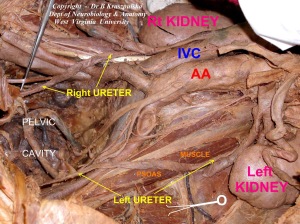 8. Ovaries, uterus and kidneys are also in the area. You can rupture an ovarian cyst, irritate endometriosis scars, or bruise kidneys, the ureters or bladder. Look at the photo - you have to get through A LOT to get to Psoas.

So What Should You Do?

1. Use an experienced degree-trained health professional who has experience in knowing about the internal organs and muscles. To be honest, Osteopaths traditionally are taught "visceral manipulation". Some physios and chiros (like myself) have done courses on how to "listen" and take care of viscera. These courses are often restricted to physios, chiros and osteos...that is not to say your massage therapist isn't trained, it is just much more unlikely. Hopefully the above list gives you an idea of what I am thinking about when I examine that area. The unfortunate situation is that even experienced therapists doing the right thing might aggravate things. I don't think Karin's therapist was negligent but from what Karin has told me, the pain got worse after the treatment. Like I said earlier, it could have been ready to go and anything could have set it off. 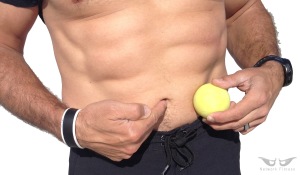 2. Use a broad-based object like a kettlebell handle, roller or ball to release your abdominals - forget about trying to get the psoas. Honestly, you have to solve why they are getting jacked up, not just try to beat them into submission.

3. The pain should be tolerable, like a 2-3/10. There are usually better things to go hunt down than pounding your abdominal wall. If I do decide to proceed with a painful treatment, it is for a good reason and I explain it and demonstrate using test-retest why it was done. Even if it is for 30secs, I am wary of painful treatments.

4. Proceed with caution. Don't just let anyone stick their fingers or foot or implement into your guts. If you feel sick, throw up or have diarrhea after treatment, get thee to the hospital ASAP!

Karin is recovering in hospital still as I write. She had to stay in a few days with IV antibiotics because the appendix ruptured and leaked into her abdomen. She will make a full recovery and eventually be able to train again but recovering after abdominal surgery means that her training is interrupted for at least 6 weeks. [update - she developed an abscess and now has to have a drain inserted and an extra 5 days in hospital]

We love doing things that "hurt so good"...damaging internal organs shouldn't be one of them!

Please take care in the future of what you choose to release and why. There are many ways to "release" your psoas... It takes a comprehensive assessment to work out why it wants to lock up. Find someone who knows what they are doing...if you can't find someone, you can always contact me.

You are an adult - take this information and make an informed decision. Discuss it with your coach and health care team. Make sure that if you are truly interested in taking care of your body, that whatever you do to it and whomever you let "release" your Psoas, knows what they are doing and have taken the above information into account. Even then, as with Karin's story, treatment can still flare things up.

I would be interested to hear your thoughts on what I have presented above - have you honestly thought about these issues before? Will Karin's story change your views on what you do to your Psoas?